On the 22nd October I attended MCM Comic Con (previously known as MCM Expo) in London at the ExCel Centre.

I hadn't attended this particular event for a few years and it was quite different than expected. It's normally one of those events that vastly, possibly dangerously, overcrowded but this year there were far less people attending and the stalls in the venue were far more spread out than usual giving everyone more room to walk around. I'm guessing this was due to Covid restrictions. Arriving at the event was the usual bag check and sniffer dog check, in fact there were a number of sniffer dogs, but also this year we had to show our proof of Covid vaccinations. There were also areas where we had to wear our face masks. There were even metal detector checks presumably to check for knives.

The outdoor section had security too and required everyone to have a ticket so no longer can people simply meet outside the event without buying a ticket. Actually it was a little cold so I didn't spend too much time outside.

I met loads of people and lots of cosplayers. Star Wars cosplay was as popular as ever but there also was Laural & Hardy cosplay, Elsa & Anna, and a family cosplaying Indiana Jones characters. There was an amazing Faith Connors cosplayer too but unfortunately I was unable to get her photograph.

I met two voice actors from the video game Overwatch, Anjali Bhimani the voice of Symmetra, and Carolina Ravassa the voice of Sombra. After getting their autographs it was over an hour before I had my photoshoot with them and Anjali Bhimani addressed me by name having remembered it which was nice. I was able to remove my facemask during the photoshoot but we were separated by a Perspex screen.

In many ways the event was far better than previous MCM conventions due to it being less crowded but something felt missing which I can't quite put my finger on. I counted four stalls selling Funko Pop figures and no stalls selling DVDs. Maybe there were less stalls over all resulting in less variety. 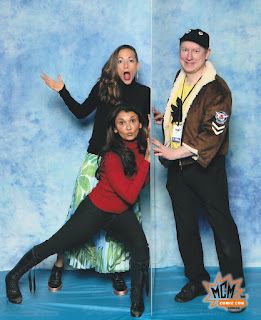 On the 22nd October I attended MCM Comic Con (previously known as MCM Expo) in London at the ExCel Centre. I hadn't attended this partic...