I signed up with Goodreads again in the hope I'd gain some benefit from it and promote my books at the same time but there's something odd about it that doesn't sit right with me, in fact there are many things, so I'll likely end up closing the account in the future.

The first time I used it was a number of years ago but back then my account was as a reader rather than an author so I spent most of my time writing reviews or in some cases copy/pasting reviews I had previously posted on Amazon. I tried to keep the reviews brief and to the point as I knew people were unlikely to spend time reading through reams of text. I also used my own name so reviewing my own books was out of the question. Then I began noticing certain things about other peoples' reviews. Such as an autobiography written in the 1980s being bombarded with 1 star ratings, being accused of plagiarism, due to the author having the same name as another Goodreads author. There was another instance where a horror story was given a 1 star review by someone who simply stated "I don't like horror" as their review. Unlike Amazon there is no need to purchase a book before leaving a review.

Recently after signing up again, this time as an author, I still got the same niggling feeling inside that this isn't the place for me. Someone on Twitter had already advised me that genuine reviews are often more honest on Goodreads if there is no author page as readers are more likely to leave an honest review if the author doesn't get to see it. Obviously an author can still read the reviews without even having an account so there is no real need for an author page.

I noticed that some of my books were listed on another author's page of the same name as well as a blank author page. I contacted Goodreads about this to get them transferred to my page but got no response.

I'll still stick with it for the time being, and leave reviews for books I've read, but I can't see myself using it in the long term.

Email ThisBlogThis!Share to TwitterShare to FacebookShare to Pinterest
Labels: goodreads

Sir Clive Sinclair died recently so I thought I'd say some things about him, not about him personally but how he influenced my life in c... 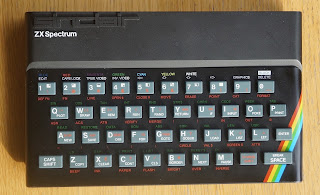