I had something surprising happen to me recently on Twitter. Usually when I post something I may get one or two likes or retweets but I've never had a popular post before until a few days ago.

There was a hashtag on the Trends list called #ThatsMyUnpopularOpinion with people posting all kinds of Tweets in response, many of which where serious while others were light-hearted. I wanted to post something light-hearted to do with anime but couldn't think of anything witty but then a thought came to me. I had been watching the Tangled spin-off series on Disney Plus so rather than post something anime related I posted a comment about Tangled.

It paid off big time and in just a short amount of time received thousands of likes, hundreds of retweets and lots of comments. 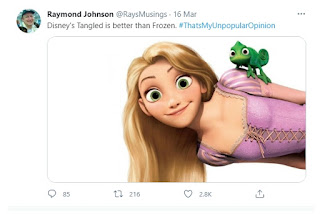