A strange thing happened to me a few days ago. I was playing the game Mirror's Edge Catalyst on the PlayStation 4 and was intending to do some bag delivery missions when I noticed a voice glitch. I had never noticed it before despite performing bag deliveries so often in the game.

The voice line said this:
Scrip making opportunity available nearby.
I urge you not to take this delivery lightly. Destination uploaded. Payment awaiting conformation.

I noticed the robotic female voice appeared to mispronounce the word conformation saying something like authormation instead, as though the voice actress fluffed the word then quickly corrected herself. I even plugged in headphones to confirm my suspicion. I then uploaded the clip to Twitter.

The next day when listening to it back on Twitter it was clear she hadn't fluffed the word and pronounced conformation clearly. I don't know what happened there. It's an odd situation.

I had a strange dream today. A dream within a dream solved by reading. I dreamed that I was sleeping with my cat Squeaky and I woke up to fi... 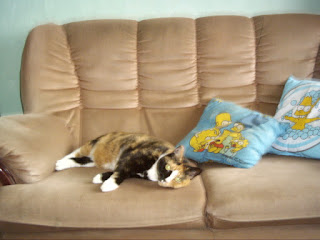